John W. Alford was born in Baltimore, Ohio on October 21, 1912. He attended DePauw University and attained employment at Park National Bank in 1935. He was a World War II veteran and "active in the Newark Area Chamber of Commerce, Licking Memorial Hospital, the Boy Scouts, United Way, Salvation Army, Par Excellence Learning Center and other groups."[1] John and his wife had two children: Ronald B. Alford and Barbara (Alford) Cantlin.[2] 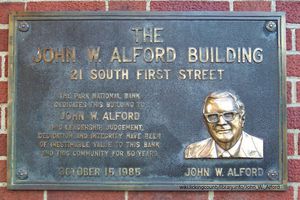 Announcement from the October 17, 1985 edition of The Granville Sentinel celebrating Mr. Alford.

Not only was Mr. Alford a prominent business man, but his kindness, generosity, and philanthropic efforts continue to make a difference in the lives of Licking County residents more than twenty years after his death. During his life, he was active in many local organizations, including: director and treasurer for the United Way of Licking County; member of the citizens' advisory committee for the Board of Education for Newark Public Schools; helped raise over $80,000 for the Food Pantry of Licking County in 1983; trustee of the Licking County Foundation for Public Giving; honorary trustee of the Dawes Arboretum; life trustee of Denison University; and held leadership roles in Boy Scouts, Denison University Research Foundation and Ohio State University-Newark Campus.[5]

Mr. Alford was a beacon of the Licking County community during his life, and his legacy pays tribute to his kindness and passion for the people of Licking County. In October of 1985, to celebrate his 50 years of service to Park National Bank, the financial institution published announcement in The Granville Sentinel. The one-page statement praised Alford, stating "His professional and civic achievements are lofty, numerous and meaningful.... John Alford is a truly great man".[6]

John Alford died on May 27, 1996 at the home of his daughter following six months of failing health.[7]