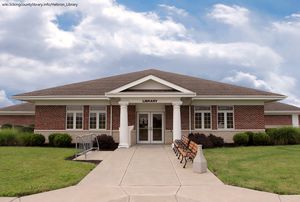 The Hebron Branch of the Licking County Library dates to November of 1936 when the Hebron Mutual and Civic Improvement Club sponsored the creation of a public library in a room in the town hall. The club provided a collection of books to create the library. It opened for public use on Saturday, November 28, 1936.

On June 15, 1956, a group of women met to form the Community Housing Committee with the intention of creating a new public library for the village of Hebron. The Committee purchased the old ice house for $2,500 in February of 1957 with the hopes of converting it into a suitable library building. The group changed their name to the Hebron Community Foundation and began fundraising for the renovations. Unfortunately, the estimate to renovate the ice house was far too expensive, so they sold the building to a real estate agent for $2,000, a $500 loss. The Foundation set their sights instead on the old Hebron Bank building at 116 East Main Street. Imogene Berry, Chair of the Hebron Community Foundation, met with President John Alford of Park National Bank to discuss the possibility of obtaining the building. Alford agreed to donate the bank building to the Foundation free of charge with the agreement that it would be maintained as a branch of the Newark Public Library. The building and an adjacent lot were deeded to the Hebron Community Foundation in September of 1963. Renovations were made to the bank, the collection was moved in, and the library opened to the public in March of 1965.

By the late 1960’s, the Hebron Community Foundation faced severe financial issues and could no longer support the cost of library operations. They attempted, unsuccessfully, to sell the building to other organizations throughout the early 1970’s. Finally, a levy was passed in 1976 to cover the expenses of operating the library. In November of the same year, the Hebron Community Foundation was dissolved and the building and its furnishings were given to the Village of Hebron.

The Hebron Library remained in the old Hebron Bank building for over 20 years. However, by the end of the 1990’s, the library had outgrown the small space. The Village of Hebron also needed a new administrative building and police department, so plans were drawn up for a building that would provide for all of those needs. Village officials broke ground at the new location at 934 West Main Street in July of 2000, and a ribbon cutting ceremony officially signaled the building’s completion on August 5, 2001. For the past 16 years, the Hebron Library has flourished in its current location as a valuable and beloved asset to the community.