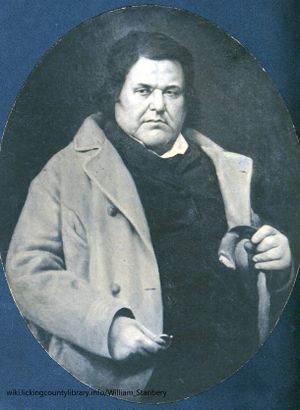 William Stanbery, 1820.
William Stanbery was born in New Jersey in 1788, the son of Jonas Stanbery. Jonas was one of the largest land speculators in early Ohio after purchasing land grants from Revolutionary War soldiers who did not want to go to Ohio. This included five quarter-townships of 4,000 acres each in Licking County alone, and many more in other counties. The first public library in Worthington, Ohio was named after Jonas due to a significant donation of books.

Jonas moved his family to New York where his son, William, was able to acquire a very good education. He shared membership in a literary club with Washington Irving. William studied law in New York and witnessed many well-known lawyers in action, such as Aaron Burr, Alexander Hamilton, Martin Van Buren and Dewitt Clinton.

In 1809, William relocated to Newark, Ohio and became the first attorney in Licking County. From 1824-1827 he served in the Ohio Senate, and from 1827-1832 as a U.S. Representative. In 1829 he fought and lost the effort to have the National Road routed through Newark. Stanbery befriended John Chapman in those early years (Johnny Appleseed), who often visited and slept on Stanbery’s front porch, because he would rather stay outside.

In early 1832, Stanbery made some accusations in a Congressional session about Sam Houston and others regarding Indian affairs, and Houston took him to task for it. They met accidentally on Pennsylvania Avenue, and Houston beat him with his cane. As both men were of large stature, Stanbery did not fall, so Houston jumped on his back and wrestled him to the ground. Stanbery managed to pull out his pistol in self-defense, held it to Houston’s chest and pulled the trigger, but it misfired. Stanbery brought criminal charges for the attack, but the trial failed to yield results. Even though Houston had hired Francis Scott Key as his attorney, he primarily defended himself. His admission of guilt was phrased so eloquently that it was taken as a plea of not guilty. The extended trial finally brought a vote of guilty by 106 to 89, but the sentence was only a verbal reprimand. Next, Stanbery filed charges in civil court for assault. Houston was found guilty again and fined $500, but by December he moved to the Texas territory, which was still under Mexican rule. His wife refused to go with him, and he never paid the $500.

Stanbery was not re-elected in 1832, so he returned to his law practice in Newark. In 1841 he was involved in a runaway slave case in Granville along with attorney Samuel White. The slave from Kentucky, named John, had been caught in Newark, and his case was transferred to Granville, where abolitionists maneuvered court proceedings into allowing John to escape again.

Another well-known and legendary case Stanbery handled was the defense of Peter Dimond, who was accused of murdering a fellow worker at Mary Ann Furnace. Just moments before being hung in Newark before a large crowd of onlookers, Isaac Cool rode up on horseback with a pardon from Ohio’s Governor Morrow. Stanbery and Thomas Ewing had argued that Dimond should not receive the death sentence, because the murder was not premeditated. Still another case was Stanbery’s attempt to have Rachel Konkupate transferred to Newark for better medical care and a fair trial after she had been shot in Utica. Several men playing a card game had placed a bet where the loser would go to a nearby Indian encampment and shoot one of them. A man named McLane lost the bet and followed up by shooting Rachel in the hip. She was pregnant and lived long enough to give birth, but died soon afterwards. The encampment then became known as Squawtown.

The railroad was coming through Licking County in 1852, so Stanbery founded the town of Toboso at the point where he thought the railroad would cross the canal. He died in 1873 and was buried at Cedar Hill Cemetery in Newark.[1][2][3][4][5][6]