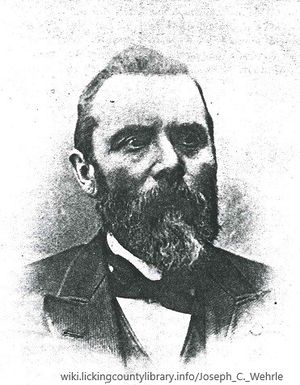 Joseph C. Wehrle is most remembered in Licking County for his interest in the Wehrle Stove Company, which was at one time the largest industry in the county. He was born in Germany on March 3, 1836 and came to the United States with his family at the age of thirteen. They settled in Newark, where his father, Martin, was a blacksmith. Joseph was the eldest of ten children, although only four lived into adulthood. He first learned the molding trade, and then opened a grocery store on Fifth Street in 1859. [1]

In 1861, he enlisted in the Civil War and became a Second Lieutenant in the 76th Ohio Infantry, Company E. He organized his own regiment in Newark and was commissioned a Captain. He fought at Vicksburg, Chattanooga, Lookout Mountain, Atlanta and many other sites. He was discharged on October 28, 1864 when his term ran out, and was given the rank of Lieutenant-Colonel. [2]

After returning to Newark, Wehrle partnered with T. J. Davis in a wholesale grocery business, then a wholesale liquor business, then another grocery store with John McCarthy. McCarthy had married Wehrle's sister, Catherine. Joseph married Philomena Morath in 1865 and had eleven children, but only five lived to be adults. Of these, Joseph became a Catholic priest, and Mary became Sister Eulalia of the Dominican Order of St. Mary's of the Springs. William eventually became President of his father's foundry in 1909. August T. Wehrle helped greatly to develop the business aspects of the foundry, and later became President of the Wehrle Realty Co. He was honored by two different Popes for his contributions to Catholic missions, and he has a library named after him at Pontifical College Josephinum. Cecelia married the well-known Dr. Willard C. Rank of Newark.

In 1883, Joseph joined John Moser in the manufacturer of stoves in a company called Moser & Wehrle Foundry, located on Buena Vista Street. Joseph died on March 31, 1890, owning three-fourths of the company. His widow, Philomena, purchased the other quarter. After the estate was settled, their son, William W. Wehrle owned half of the business, while the estate retained the other half. It was not called the Newark Stove Company until 1939. [3]

Joseph owned a great deal of property around Licking County, including several city blocks in Newark. The Wehrle Foundation donated a 557 acre farm near Hebron to the Columbus Catholic Diocese in 1955, which was then used for the PIME Seminary complex.