Horn's Hill, or Horns Hill, Park, has a surprising history. Its geographic prominence and close proximity to Newark have made it a site that has been both developed for critical municipal water infrastructure, and preserved as a place of recreation. The continued investment by the city in the site for the city's water supply led to its conservation as a wooded area.

Image of Horn's Hill area as property of William Horn from 1854 map of Licking County.

The Hill and the surrounding property were owned in 1854 by William Horn, a farmer and veteran of the War of 1812 who operated a mill on the North Fork of the Licking River. [1] Horn died in 1863, though his name would become a permanent fixture to the area he once owned. David Evans, in reminisces of his youth in Newark in the 1870s and 1880s, recalled how Horn's Hill appeared at the time: a wooded, natural space close to human development. A grist mill operated by John D. Jones, likely the same owned by William Horn, stood at the foot of the hill on the North Fork of the Licking. Still, the hill had a wild feel to it; blueberries and sassafras grew there and were harvested by locals. [2] Horn's Hill was known for its lovely views and refreshing breezes. [3] In 1885, Newark planned a water reservoir on top of Horn's Hill "at a depth of 15 feet below the flow line, to have stated capacity of 3,000,000 gallons," and the area was cleared of trees, stones, and debris. [4] As the city grew, the Hill would become a staple of Newark's water system.

Horn's Hill remained an informal place of recreation and was known primarily for the water reservoir in the late nineteenth century. 1910 is the date typically attributed to the acquisition of the land by the city, yet this date appears to be incorrect; it may reflect, rather, a change in how the city viewed the property and not the acquisition date, because in the early 1900s, Horn's Hill, and its role in the city water system, would be tinged with controversy. The property surrounding Horn's Hill came into the city's possession around 1901, not 1910, when L.E. Chapin, consulting engineer on the issue of a new water plant, recommended its purchase. Chapin determined the Hill to be the most likely spot for further development of the Water Plant, and, at this request, John Lamb, president of the Public Service Board, purchased a 51-acre plot with a house, barn, and out buildings for $2450.

The Board revisited the subject in 1905 with the drive to construct a new water plant. A new engineer, Lewis K. Davis, advised the Board to relocate the pumping station from Horn’s Hill to save money, setting in motion events that would lead to controversy and an investigation into the planning and financial decisions surrounding the water plant. Lamb in particular was sensitive to the allegation of wrongdoing in the purchase of the property for the plant. He offered, whether sincerely or not, to purchase the Horn's Hill land from the city at interest, a plan which was never pursued to a resolution. The property would remain in city hands. [5]

The questions swirling around the construction planning of the water plant prompted an investigation of the board and the decisions it made in establishing the new facility. The Horn's Hill site was the original, planned location, but was abandoned in favor of another site, purchased by a local land speculator named Hamill with ties to the board. Davis, the engineer at the time, presented a concern that the drainage at Horn's hill would not make it optimal for the pump station, but before the city could purchase Davis' new location, Hamill purchased the property. [6] Horn's Hill became the final location of the water plant, and the city retained the property. The swirl of scandal and insider dealings, however, prompted deeper investigation. There was yet another survey conducted of Horn Hill in May 1906 for the construction of the water works system. This time the supervising engineer, W.P. Mason, determined that the Hill was a good location for a concrete reservoir. Mason claimed that the site could house a reservoir at less cost than the one recommended by former engineer Davis. Davis would come under additional scrutiny for charging the city for survey work completed by another engineer, adding another layer to the saga of the new water plant.[7] 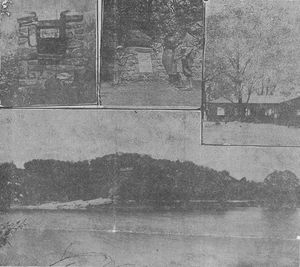 Throughout the period of the water plant's construction, Horn's Hill continued to be used by local residents who recognized its natural beauty. Several dozen people would gather at a time for "camp suppers." [8] The visit of a famed astrologer in 1910 caused a sensation when, after a night of reading the stars at the Hill's pinnacle, he tripped and rolled down much of the descent. [9]

The formalization of the area into a park was one often discussed, but left unrealized; that Horn's Hill would make an ideal recreation site for the city was mentioned by a Pataskala Standard reporter that wrote of a "New City Park" at Horn's Hill on property owned by the city. The piece appeared in the Advocate in 1906, yet this appears to have been optimistic speculation and nothing formal was enacted. [10]

A new dam was added to Horn's Hill in 1911. Director Christian of the Public Service Board suggested that the surrounding area could be turned into an amusement park. The reservoir for the water plant would make for a nice recreation space, he said at the time. The city owned about 90 acres of surrounding land, including Horn's Hill, but the nothing formal appears to have taken place. [11] In the early 1910s, Horn's Hill continued to be a popular place for young people of Newark to escape the city for a picnic or campfire. The idea of converting Horn's Hill into a more formal recreation area continued; Ohio's chief Game warden, John Speaks, supported the use of the river and dam area as a location for fishing and boating, offering to stock the waters with fish in 1916. [12]

Interest in providing amenities to Horn's Hill became more serious in the 1930s. The site included several Native American mounds identified by Henry Shetrone in 1933 while Shetrone and a group of state officials were visiting Horn's Hill to assess the space for a city park. [13] The mounds were excavated and the remains found inside were included in a new monument dedicated in November 1933 by Mayor Charles Martin. [14] In 1934, a bathroom and trails were added to Horn’s Hill [15] Like many projects of the period, the Horn's Hill work was assisted by the Works Progress Administration. With more amenities, the Horn's Hill Municipal Park became a popular place for local clubs to host events, particularly the Licking County Garden Club. More than 25,000 visitors signed the log at Horn's Hill in its first two years of operation (1934-1936). [16] The site held a police shooting range by the late 1940s, but this was removed to make it more accessible and welcoming to the public. [17]

Still using the Horn's Hill with the apostrophe, a federal HUD grant enabled extensive renovations of the 102-acre park in 1984. New restrooms were added and the existing shelters were refurbished. [18] The Park became a place of illegal trash dumping in the late 1990s, illustrating the risks of a having remote, wooded space located so close residential and commercial development. [19]

Horns Hill Park, having lost the possessive apostrophe from its name, closed temporarily from 2006 to 2007 due to the destruction of a restroom and concerns about behavior occurring in the park. The park was closed again in 2008 for tree and brush clearing, and the sale of timber from the clearing permitted the restoration of the shelter house roof and the removal of graffiti. A refreshed Horns Hill park reopened to the public in May 2009 [20]

There was a movement within Newark's city council to sell the park in 2013, but concerns for municipal assets located on the hill—water tanks, an emergency radio tower, communications tower, and cell tower—and the public use of the trails and amenities, convinced the council to continue its possession and maintenance of the site. [21] A new renovation project, supported by the Horns Hill Park Improvement Fund, is underway at the park to add more trails for the public. [22] Mountain-bike trails now join a course for disc golf, playgrounds, and shelters. [23]