Difference between revisions of "The Castle" 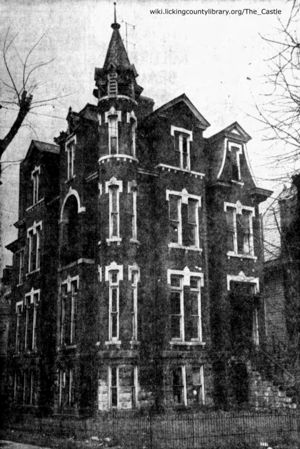 The Castle. Photo from the Newark Advocate on February 19, 1952, page 20.
“The Castle” was the nickname given to a home built by Mayor Gibson Atherton on the northeast corner of North Second Street and East Church Street in downtown Newark in the 1860s. The home was inspired by houses that Atherton’s wife saw in Washington, D.C. The Castle was a turreted home with four stories – the only of its kind in Newark. [1] It had a kitchen and dining room in the basement, tall windows, and was made of brick and stone. [2] According to artist Vearl Wince, who painted a picture of the home in 1987, remembered the unusual color of the brick as being a distinct shade of purple. [3]

Gibson Atherton, the home’s builder, was an early mayor of Newark, serving from 1860-1863. Additionally, Atherton served two terms in the US Congress in 1878 and 1880. [4] After the Athertons, The Castle was the home of James Lingafeller. It was also later owned by Claude Davis, Dr. Victor Turner, and finally Cosmo Investors. [5]

The site of The Castle is now a portion of the parking lot of the DoubleTree Hotel in downtown Newark.