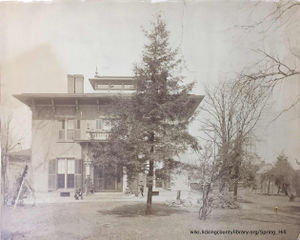 Spring Hill. Photo from the archives of the Licking County Historical Society.
Spring Hill was the name of a home built by Hezekiah Sprague in the 1860’s at the intersection of North Fifth Street and West Locust Streets in Newark. The house was substantial in size and built of brick. The property extended north and eastward and included a greenhouse that was home to many varieties of plants. [1]

Hezekiah Sprague was known for welcoming Newark’s residents to enjoy his collection of plants and roses. Among the variety of roses housed in his conservatory were La Marque, Gloria de Rosamond, Soprano, Bon Galene, Isabel Sprunt, and Marshal Neil. [2]

Although the home was built by the Sprague family, it was also the home of the W.N. Fulton family. Both families held social events at the home and hosted lavish weddings for their daughters.

In 1909, the First Methodist Church relocated from the corner of North Fourth and West Church to the property on which Spring Hill stood. The sanctuary was constructed in front of Spring Hill so that it cut off the view of the home from Locust Street. The home was used by the church as a manse and offices. [3]

Spring Hill stood behind the church and was used by it for another 57 years. In March of 1966, Spring Hill was torn down to make way for a parking lot expansion. [4]

Return to Historic Sites and Buildings