The history of Licking County begins nearly 14,000 years ago when the area was still covered by a giant glacier. [1] Near the end of the last Ice Age, the glacier began to retreat and Ohio's climate grew warm and greenery began to takeover the area. During that time, animals wandered into the area, including mastodons, giant beavers and sloths, and saber toothed cats, searching for food. Soon after, the first people came to inhabit the area called Paleoindians, named by scientists to mean really old Indians. [1] These Paleoindians were hunters who survived by hunting and following the herds of animals as they settled across Ohio. They hunted with spear like weapons called atlatl. The Paleoindian culture dominated the area for nearly 6,000 years while the climate continued to grow warmer still. [1]

The history of county picks back up again about 2000 years ago when the area was occupied by the Hopewell Tribe. They lived on the land for a number of years, before disappearing for no apparent reason. They left behind a countless number of mounds in the Great Circle, the largest named Earthworks. [2] Ohio is reported to contain more remains of the Mound Builders than any other state, with Licking County being one of the most prominent locations. After the Hopewell Indians came the Wyandotte, Shawnee and Delaware Indians who settled in the area. It is believed that it was during this time that Licking County got it's name from the salt licks that littered the banks of the river.

Soon after, English settlers from the east came to explore the area. Christopher Gist was the first white man to set foot in Licking County in 1751. [3] He came as a member of the Ohio Company of Virginia, and crossed the Licking River near the mouth of Bowling Green Run, about four miles east of Newark. After the came John H. Phillips, and his two younger brothers, and Thomas and Eramus, immigrants from Wales. John H. was supposedly skirting the law, and left the country to avoid arrest. Together the men purchased 2000 acres of land in the northeast corner, now Granville. Two other early settlers, Elias Hughes and John Ratliff brought their families to settle in the Bowling Green region, east of present day Newark in 1798. [4] Newark was the first permanent settlement in Licking County established in 1802. 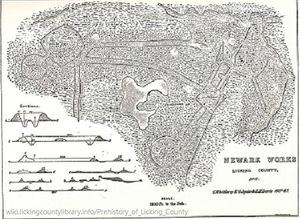 Map of Newark Earthworks, made by the Hopewell Indians

Located in the western part of Newark, the Newark Earthworks are the largest geometric earthworks in the world. [5] They were built by the Hopewell Indians between 100 B.C. and A.D. 400, and are the only remaining evidence of the Mound Builders in Licking County. The geometric enclosures were once part of an elaborate system that spread over four miles, connected by embankment lined paths. The specific purpose for the earthworks is not specifically known, but scientists speculate that they were used for burials or ceremonial rituals. [6] The mounds measure 1200 feet in diameter, encloses 30 acres and rises 12 feet above the average level of the ground it encloses. At the center lies Eagle Mound, a series of conjoined mounds.

The mound was discovered by Isaac Stadden, an early settler of Licking County, around 1800. [7]

The Holy Stones were discovered by David Wyrick, a Licking County surveyor, near ancient burial grounds of the Mound Builders at the Newark Earthworks in June 1860. The stone Wyrick discovered was a five inch long smoothly polished, reddish keystone, with strange markings engraved on the flat sides. [8] Rev. Matthew Miller identified the stone as a Jewish teraphim, and the pointed end was intended to indicate the direction of hidden material. The inscribed markings were Hebrew that read:

The major significance of the stones and the inscriptions came from the belief that these stone came from the lost tribes of Israel, and that the Moundbuilders were themselves descendants of the lost Israelites. It also gave proof that the Israelites made their way through Asia and crossed into North America. A few months later later in November, further discoveries were made in a mound about 7 miles south of Newark. There, Wyrick found a further a wooden sarcophagus and a ovoid stone, [8] also with Hebrew markings that were part of the Ten Commandments or Decalogue. [9] By 1863 the stones had become famous and were made part of special exhibits.

The stones however were debunked in 1867, shorting following Wyrick's death. When a close friend of Wyrick's, a Dr. McCarty, was going through his estate he found an Old Hebrew Bible and a chest of stone cutting tools among his possessions. He informed archeology expert Charles Whittlesey, who published an article in 1872 declaring Wyrick and the Holy Stones to be a fraud. [8] Three more Hebrew stones were discovered in the area, two on a farm in Licking County in 1865 and another in mound near Wyrick's original excavation location further south in 1867. [10] Skeptics remain on both sides of the argument, debating the authenticity of Wyrick and the Holy Stones.

The stones are exhibited at the Johnson-Humrickhouse Museum in Coshocton, Ohio. [11] 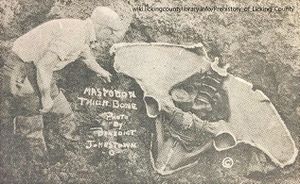 The pelvis of the Johnstown Mastodon before being excavated.

On August 12, 1926, Jim Bailey and Friend Butt attempted to bury a dead pig on Butt’s farm in Johnstown, Ohio. When Bailey and Butt, along with Butt’s nephew, started to dig a hole to bury the pig, they struck something hard with their shovel. After some digging, the men discovered that the object was a large skull, which was later determined to be of a prehistoric mastodon.[12] The farm was located near the present-day trailhead of the Evans Foundation Bike Path between East Jersey Street and East Douglas Street in Johnstown.[13]

When news broke of the mastodon’s discovery, thousands of visitors came to get a glimpse of the remains. As many as 8,000 people visited the site in just one day.[14] To capitalize on the popularity of his discovery, Butt decided to charge visitors 10 cents to park at his farm. After a bustling first day, Butt upped the parking fee to 25 cents per day. When Butt was offered $1,000 for the skeleton from the Ohio Archaeological and Historical Society, he refused the offer because he had already made more than that from parking fees alone.[15]

The skull of the mastodon weighed approximately 450 pounds. Attached to the skull was a tusk, measuring 22 inches in circumference at its base and five feet long.[16] The task of the excavation of the skeleton was taken up by Max Hirschberg of Newark, who funded and managed the operation.[17] At the time of the discovery, the Johnstown Mastodon, as it became known, was thought to be the most complete mastodon discovered to date. [18]

Discovered in 1989 near Hebron.

The Flint Ridge is a geologic formation covering a ten-mile stretch between eastern Licking County and western Muskingum County, just north of the National Road. Native Americans came from far and near as far back as 12,000-14,000 years ago to mine the flint to be used as arrow and spear points, drills, knives and scrapers. The area was considered neutral ground for all tribes.

Flint mining was a very difficult process. Any flint found on the surface and exposed to the elements was too fragile to be worked, but beneath the surface running one to ten feet down was good quality flint. Mauls up to 25 pounds were used to hammer wedges made of wood or bone into tiny cracks in order to break it loose and haul it to the surface. Workers then shaped this into blocks about a foot long and up to five inches wide so that it could be carried to other locations to knap into points and tools. Mining pits can still be seen today in many locations.

Flint from the Flint Ridge has been found as far away as northern Canada, Louisiana, Utah, Kansas and the Atlantic seaboard. It is recognizable by its bright and beautiful colors and patterns, which come out after a heat process. It was traded as a prize commodity among the Natives.

The first European pioneers in the area soon found the value of Flint Ridge flint, and used it for their flintlock rifles and tinder boxes. Workers constructing the National Road through Licking County in the early 1830s used flint scraps that they found to support the road bed.

Various studies were made of the area through the 19th and 20th Centuries, and large flint collections were established at museums in Paris, London, Berlin, St. Petersburg, Vienna, Madrid, Rome, Stockholm, and in the United States. Flint was often hauled out by the truckload. Finally in 1933, L. H. Woddrop, owner of the Flint Ridge Mining and Manufacturing Company, donated 25-30 acres to the Ohio State Archaeological and Historical Society to be used as a state park. This was the beginning of the Flint Ridge Memorial State Park, now called the Flint Ridge Ancient Quarries and Nature Preserve.[22][23][24]