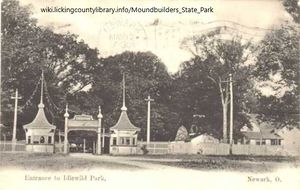 Entrance to Idlewilde Park, now called Moundbuilders State Park
Moundbuilders State Park is the home of the famous Great Circle Mound. It is situated at the border between Newark and Heath, but today mostly in Heath. The mounds themselves are estimated by archaeologists to be about 2,000 years old, built by the Hopewell people, but their original purpose remains a matter of speculation.

In the spring of 1800 Isaac and John Stadden arrived in the Newark area from Pennsylvania and cleared some land for farming. Isaac went hunting in October that year in the area known as Cherry Valley. He went home to his wife in the evening and excitedly described his discovery of what he called “the Old Fort,” because that is what it looked like to him. The name stuck for many decades, even after it also became known as “the fairgrounds” around 1853.

The first Licking County Fair was held on the grounds around the courthouse in 1833, but in late 1853 a group of citizens purchased “the Circular Fort” for $8,000 in order to hold fairs there. Before 1853, the land was divided among private owners. One of them was Nathan Holly Seymour who kept a cow pastured there. He sold his portion for $2,998 with the condition that no trees could be cut down on the embankment or within 20 feet of it. The new buyers were members of the Licking County Agricultural Society, which had formed in June 1833.

Seymour had turned down an earlier request from the Newark City Council to buy his property, because they wanted to use it as a city cemetery. Instead, they purchased land along Cedar Street for the cemetery that was called Cedar Hill Cemetery, opened in 1850.

Since 1850, the Ohio State Fair had been held at various locations around the state. It came to Newark in 1854, but had to be postponed for one month due to a cholera epidemic. That Fair kept traveling each year until 1874 when it settled permanently in Columbus.

When the 76th Regiment was raised in Licking County in 1861 to fight in the Civil War, it trained at the Great Circle, which they then called Camp Sherman, named after John Sherman who had served in the U.S. House of Representatives. Between 600-700 men camped there from October until they set out for Fort Donelson west of Clarksville, Tennessee in February 1862.

The Licking County Agricultural Society held its Centennial celebration at the Great Circle on July 4, 1876, and it was a grand event. A small book was published by Isaac Smucker to commemorate it, urged by a resolution of Congress for communities throughout the country. Smucker wrote it representing the Agricultural Society.

On September 13, 1877 a group of Civil War veterans from the Newark area met at the Great Circle for the purpose of organizing the Soldiers’ and Sailors’ Society of Licking County. They elected officers and, through a series of meetings, began plans for a major reunion of veterans in 1878. The big day came on July 22, 1878. The event was not just for the 76th O.V.I., but all living veterans, including those from the Mexican War. Records showed that about 10,000 people arrived by railroad, plus most people from Licking County and surrounding counties. Participating were President Hayes, General Garfield, General William T. Sherman, and General Willard Warner of Newark. The Mt. Vernon Republican newspaper reported that 30,000 people attended, while the Newark American reported that it was 40,000.

By the 1890s the Great Circle had become a public park. Bicycle races were held on a track inside the mound. A world record was placed there in 1895 for riding a bicycle backward for ½ mile in one minute and 43 seconds.

In January 1898 James F. Lingafelter began to promote the park for amusement and recreation. He held the grand opening of Idlewilde Park there in June 1898. After the Lingafelter family was tried and sentenced for forgery and embezzlement, the park was called Rigel Park for a short while. The interurban railroad then made it so easy for folks to travel to the new Buckeye Lake Park that Rigel Park went into decline and eventually closed.

Moundbuilders State Park is now a peaceful and favorite spot for local people to hold picnics and walk their dogs. A small museum focusing on Moundbuilders Indians is on the grounds.[1][2][3][4][5][6] [7][8]