Licking County is located near the geographical center of Ohio. Its history dates back approximately 14,000 years when Paleoindians first inhabited the region. Around 200 B.C., the Hopewell people began to build elaborate earthworks here. The first permanent European settlers, Elias Hughes and John Ratliff, arrived in 1798. Licking County was officially formed in 1808 and the county became incorporated under the State of Ohio in 1833, with Newark as its county seat. The estimated population in 2015 was 170,570.

The information on the following pages is a project of the Licking County Library's Adult Services Department. All information contained within, as well as much more, can be found in the Local History Vertical Files at the Main Library. 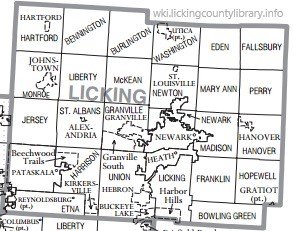 Map of Licking County from US Census Bureau