The Licking County Historical Society was organized in 1947. The first such society to exist in Newark was the Licking County Pioneer Historical and Antiquarian Society, which existed for thirty years during the nineteenth century.[1] The LCHS operates four museums as well as the Alligator Mound in Granville, Ohio. The Historical Society’s museums are the Buckingham House, Sherwood-Davidson House, Webb House, and Robbins Hunter Museum. 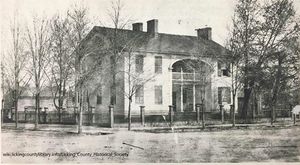 The Sherwood-Davidson House in its original location
The Sherwood-Davidson house is located in Veterans Park on N. 6th Street in Newark. The historic house museum is decorated with period furnishings and houses many artifacts from Newark and Licking County. The home was originally situated on the present site of Park National Bank, at the corner of Church and Third streets. The house was built by Albert Sherwood in approximately 1815, making it one of Newark’s oldest homes. In 1850, Colonel Robert Davidson purchased the home, where his family would reside for the next ninety-seven years.[2] The home is one of the best examples of Federal architecture in the Ohio valley, and features a fan doorway and arched two-story side gallery.[3]

In 1947, the house was purchased by the F. & R. Lazarus Company and was set to be torn down and replaced with a parking lot. In order to preserve the historic structure, the Licking County Historical Society appealed to Fred Lazarus to help save the house. Mr. Lazarus generously donated the home to the society as well as a check to fund the expense of moving the building. The house was moved in 1948 to its present location in Veterans Park on 6th street between W. Main and W. Church streets. It opened for tours in 1952, in conjunction with Newark’s sesquicentennial celebration.[4]

The Sherwood-Davidson house was once again lifted from its foundation during a complete renovation done by the LCHS. On November 7, 2004, a ground-breaking ceremony commenced at the house to begin the renovation process. The building was lifted 18-20 inches so that a new foundation and crawl space could be built under the structure, as well as new plumbing, electrical, and heating systems.[5] After the extensive restoration, the museum was reopened for tours in April of 2008. The project cost over $600,000.[6] 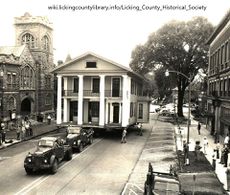 The Buckingham House was moved from its original location on Third Street to Veterans' Park in 1954
The Greek-Revival structure known as the Buckingham House dates back to 1835. The home was built by Daniel Duncan but is named after Jerome Buckingham, who was a well-known Newark resident who lived in the home. Many famous and distinguished guests have passed through its doors, including President Rutherford B. Hayes and President James A. Garfield, Civil War generals Sheridan and Sherman, and possibly General-turned-President Ulysses S. Grant.[7] The Buckingham House, like its current neighbor the Sherwood-Davidson House, originally sat on N. Third St. in downtown Newark, next to the defunct John J. Carroll Department Store. In October of 1954, the house was moved in an effort to save it from destruction. The building was separated into two halves to allow the house to fit through the streets of Newark during its journey to what is now Veterans Park on Sixth St.[8] The historic home now serves as an event space and houses the Licking County Historical Society’s offices.

Located at 303 Granville St. in Newark, Ohio, The Webb House Museum was built in 1907 for Frank Camden Webb and Shirley Parke Pitser (Webb). The couple enjoyed collecting antiques, heirlooms, and both American and Oriental Art.[9] Although Frank died in 1943, his wife continued to live in the home and volunteer in many local organizations, including the Licking County Historical Society, which she helped found. Her sister, Ethel Mosteller, also lived in the home with her. After Shirley’s death in 1976, she bequeathed her home to the Licking County Historical Society to be used as a museum and provided a trust to support the home.[10]

The home was designed by Carl Howell and was unique during its time for being built with modern amenities such as electricity and forced air heating. It highlighted the beauty of natural wood—a nod to Mr. Webb’s career in the lumber business.[11] The house, originally decorated by Mrs. Webb, is adorned with furniture, art, and antiques from the nineteenth and early twenties centuries, as well as beautiful gardens.[12]. The house is still available to visit as a museum of the Licking County Historical Society. 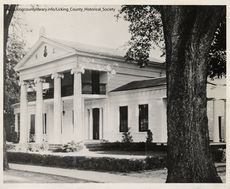 The Avery-Downer House, home of the Robbins Hunter Museum
The Robbins Hunter Museum is located at 221 East Broadway, Granville, Ohio. The house is known as the Avery-Downer House, and is listed on the National Register of Historic Places as the Avery-Hunter House, although the museum is named after its last resident. The Greek Revival home was built in 1842 by Alfred Avery, who was one of the founders of Granville.[13] Additions to the house were added in 1875 and 1930, bringing the structure to a total of 27 rooms. Fourteen rooms in the house are open to the public. [14]

In addition to the Avery family and Mr. Hunter, the house has been home to the Spelman family, the Downer family, the Cole family, the Phi Gamma Delta fraternity, and the Kappa Sigma fraternity. Robbins Hunter lived in the home from 1956 until 1979 with hopes of preserving the home as a museum. He collected many antiques to furnish the numerous rooms. In accordance with his will, the home was bequeathed to the LCHS upon his death and opened as a museum in 1981. [15]