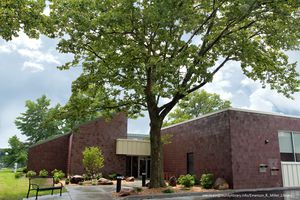 The history of the Emerson R. Miller Library begins in 1927, when Emerson R. Miller, a local philanthropist and businessman, began donating collections of books to the library. Twice a year, he donated selections of books in memory of his late parents. His intention was to provide an ample collection of books in the event that another library could be opened. In 1968, one year after Miller’s death, it started to look as if his dream of another library might become a reality when the Library Board acquired land that had been a part of the Cherry Valley School property. Construction began in 1971, funded partially with a donation from Emerson Miller’s widow, Mary McClure Miller. On November 19, 1972, the dedication of the Emerson R. Miller Library officially signaled the building’s completion, located at 990 West Main Street in Newark. Not only did the new building house the library branch, but it was also the new home of the Bookmobile. Forty years after its opening, it was announced that the branch would get an update in the form of a complete renovation and expansion into the former Bookmobile garage. A grand reopening celebration on March 3, 2013 signaled the library’s reemergence as a fixture in the community. The Emerson R. Miller Library continues to thrive, and will celebrate its 45th birthday in November of 2017.