Difference between revisions of "Covered Bridges"

Licking County is crisscrossed by rivers, creeks, and at one time, canals. Because of this geographical characteristic, the county is home to a large number of bridges. In years past, Licking County could boast over 150 wood truss bridges. It’s possible that there were even more at one time, but unfortunately the Licking County Commissioners’ Journals are missing from the years 1866-1875, so we do not know for certain how many bridges were built during that time.[1] The following is a list of just some of the covered bridges that could be found throughout Licking County.

The Belle Hall Bridge was built over Otter Fork on Dutch Cross Road [2] in the northwestern part of Licking County. It was badly damaged by a truck in 1970 and was rebuilt with steel reinforcements. By 1990, much of the siding was missing.[3] The Belle Hall Bridge has since been replaced.

Camp Falling Rock, the Boy Scouts’ camp in Eden Township, is home to a covered bridge that was originally built in 1882. It was known as the Rainrock Covered Bridge and was moved from its original location over Rocky Fork Creek on County Road 210[4] in 1974. It is 44 feet long and is of a multiple kingpost design.[5]

The Canal Greenway Bridge was built in 1992 on the Canal Greenway bike path southwest of Hebron. It is an eighty foot Town truss bridge. The bridge is open to pedestrians and bicyclists. It was designed by John Smolen, who was the Ashtabula County Engineer.[6] It is visible from nearby Canal Road.

Crossed the North Fork of the Licking River.[7]

The Claylick Bridge was built in 1876 to cross the Licking River at Claylick. It was a 258 foot Howe truss bridge and was built by E. Anderson and Company. The bridge was destroyed by a fire in 1937. [8]

The Creek Road Bridge was built by Dennis Rittenhouse on Creek Road crossing Muddy Fork near the Pataskala Cemetery.[11]

In 1947, Ernest Davis built a covered bridge over Rocky Fork on Hickman Road to provide access to his farm. He built the bridge out of old barn timbers using a multiple kingpost truss design. The Davis Bridge was renovated in 1991 and can still be seen just off of Hickman Road.[12]

The Dorsey Mill Bridge was located on Dorsey Mill Road southwest of Newark. It was approximately 216 feet long. [13]

The Dunn Bridge was the fourth bridge spanning the Wakatomika on Frampton Road. It was built in 1883 and removed in 1949.[14]

The East Main Street Bridge in Newark was originally built as a covered bridge meant to accommodate traffic going both ways. It was built in 1837 and lasted until 1870 when it collapsed. A ferry service was temporarily established until another bridge could be built. The second covered bridge to span the river lasted until 1890 when it was washed out by a flood. In 1898, a steel truss bridge was built in its place.[15]

The Frampton/Little Bridge was the fifth bridge found on Frampton Road crossing Wakatomika Creek. It was built at the community of Frampton, a small crossroads town. It was built in 1884 as a replacement for a previous bridge, and was demolished in 1949.[16]

The Shoults Bridge, also known as the Girl Scouts Bridge. It was on land owned at one time by the Mercer Family, so it was also occasionally referred to as one of the Mercer Bridges. It was built in 1879 about two miles north of Frampton Road, near the Girl Scouts Camp. It is seventy-four feet long and is a multiple kingpost bridge.[17]

The Gregg Mill Bridge was built in 1880 over Wakatomika Creek on Frampton Road near Fallsburg.[18] It was one of five bridges originally spanning the Wakatomika on Frampton Road. The bridge is 124 feet long and features a multiple kingpost truss design.[19] In 1987, voters passed a public works bond issue to invest $198,000 into the bridge’s restoration. Much of the original construction and materials were refurbished, and the bridge was reinforced to hold up to modern traffic.[20] In January of 2005, the bridge suffered heavy damage from flood waters. The Federal Emergency Management Agency reimbursed $307,000 to the county in order to make repairs to the bridge. The structure was damaged once again in October of 2008 when a vehicle that exceeded the 10’ clearance limit attempted to cross the bridge. The damage left the bridge unusable, tearing out many of the beams and supports that held up the roof.[21]

Crossed the North Fork of the Licking River. [22]

The Kirkersville Bridge was a Long truss bridge that crossed the reservoir feeder for the canal just east of Kirkersville. It was located on the National Road. The exact date of its construction is not known, but it is estimated to have been built in the 1840s. It was removed in 1917.[24]

The McLain, or Lobdell Park Bridge, was originally located on Lobdell Road (County Road 116) near Alexandria.[25] In the 1940s, the lower siding was removed for repairs and was not replaced. In 1970, the bridge was bypassed by another road and was left abandoned.[26] In 1976, an effort was put in place to move the bridge to the Ohio Historical Village, where it would be restored and maintained by the Ohio Historical Society.[27] Ultimately, the bridge was moved to Fireman’s Park in Alexandria and was renovated. The bridge originally displayed a sign at its south entrance stating that it had been built in 1871 by F. Phillips[28]. Today it is still located just outside of Alexandria on State Route 37.

The Mercer Bridge (which was the second bridge on Frampton Road by that name) was located east of the Mercer/Thumwood Bridge. It was of a six-panel multiple kingpost design and was built in 1883. It was the third of five covered bridges spanning Wakatomika Creek on Frampton Road. This bridge was demolished in 1948.[29]

The Mercer/Thumwood Bridge is also known erroneously as the Johnny Little Bridge. It was built in 1875 by Simon Shrake.[30] It was rebuilt in 1883 after a disastrous flood.[31] It was built as a Burr truss bridge, but its arches were removed during a renovation in the 1960s. It stood just east of the Gregg Mill Bridge, also over the Wakatomika on Frampton Road.[32]

Crossed the South Fork of the Licking River at Pataskala.[33] 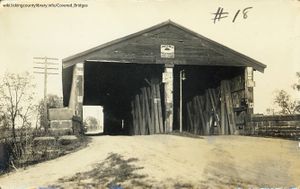 The Stadden Bridge, or Stadden’s Ford Bridge, crossed the South Fork of the Licking River on Stadden’s Bridge Road. The spot marks the original ford in the river where it was crossed by Native Americans and later by white settlers. The area is named for Isaac Stadden, who settled in the area around the year 1795.[37]

The covered bridge on State Route 310, known today as Hazelton-Etna Road, crossed Muddy Fork just south of Pataskala. It was torn down during World War I.[38]

The “Twin” Bridges were located on Lake Drive Road in Heath, part of which is also called Liberty Drive today. The first bridge crossed Ramp Creek and the second bridge crossed the South Fork of the Licking River. The two bridges were only about 500 yards apart. The bridges were destroyed in 1949 and 1954.[39]

The Toboso Bridge, also known as the Licking Dam Bridge, was originally built in 1858 as a two-span Burr truss bridge. It needed maintenance almost immediately and repairs were made by its builder, John Shrake, in 1860 and 1861. The county hired O.Z. Hilleary to rebuild the bridge, and in 1862 a third span was added. The newer third span was a multiple kingpost design, contrasting with the Burr truss design of the other two spans. The bridge was demolished in 1949.[40]

Crossed the North Fork of the Licking River.[41]

The Watkins Road Bridge crossed the South Fork of the Licking River on Watkins Road, just north of the intersection with Creek Road.[42]

Crossed the North Fork of the Licking River.[43]

Crossed the South Fork of the Licking River.[44]