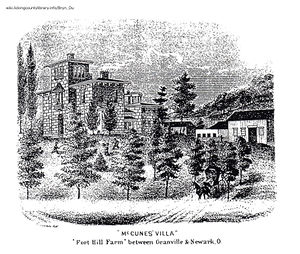 This engraving shows how Bryn Du, also known as McCune's Villa, originally appeared.
The building now known as the Bryn Du Mansion was built in 1865 by Henry D. Wright. The home was originally built in the Italian Villa style at the base of what was known as Fort Hill. The sandstone used to build the home was quarried from the hill.[1] Within a year of the home’s construction, the property was sold to Jonas McCune and Wright moved west to Kansas.[2] The home became known as McCune’s Villa.[3]

After McCune, the property was owned by the Cole family, and later the Birkham family. The Birkhams began renovating the home. It was during their ownership that a large second-floor solarium, which was supported by four piers, was added to the south side of the central three-story tower.[4]

John Sutphin Jones bought the property in 1905. Jones was a very successful coal and railroad magnate. He commissioned architect Frank L. Packard to transform and enlarge the home. The project took nearly five years and completely changed the appearance of the home from Italian Villa to Georgian-Federal.[5] It was Jones who named the property Bryn Du, which means “black hill” in Welsh.[6]

Jones’s first wife, Sarah Follett Jones, died in 1919. He remarried in 1920 to Alice Baxter from Chicago. John and Alice had two daughters, Sallie and Alice Virginia. When their father died, Sallie and Alice inherited the property. The land was split between them, with Sallie inheriting the western portion including the mansion.[7]

Sallie Jones Sexton lived at Bryn Du until it was sold in 1976.[8] Since then it has been home to various organizations and businesses and is currently operated as a venue and event center.