Difference between revisions of "Breweries and Wineries"

Licking County has a long history of brewing. Early accounts of the area's history made frequent mention of liquor consumption (primarily whiskey) and the production and consumption of ale and lager would not become part of the industry and social life until the arrival of German immigrants to the region in the 1830s. The earliest record of commercial beer production in licking county was in 1844 with the brewery founded by Michael Morath, an immigrant from southern Germany. Morath arrived in Newark Ohio in 1832. He became a successful brewer and property owner in the growing town. Morath opened his first brewery in the southern part of Newak, south of the canal.[1] 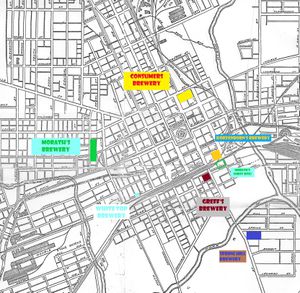 Map of 1908 Map of Newark with early brewery locations added
Many of Newark's early breweries clustered in the this area and catered to German immigrants and travelers. Morath's second, larger facility opened in 1858 along sixth street, in a large piece of property that served as a beer garden. 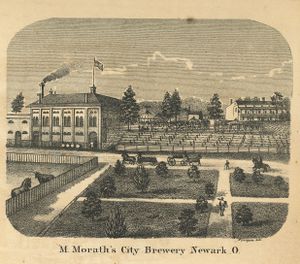 Morath's second brewery between 6th and 7th streets. Image from the 1866 Atlas of Licking County

A number of other German brewers established themselves in Newark in the middle of the nineteenth century: Graff, Kneule, Rickrich (Spring HIll), Benner-Beuthal-Eichhorn (White Top) and Korzenborn (Newark Brewery).[2] Korzenborn's brewery was the most successful of these smaller operations yet none rivaled Michael Morath's early success.