Difference between revisions of "Birkey Mansion" 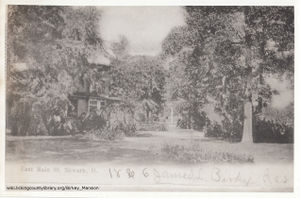 This is the only photo that we are aware of depicting the Birkey Mansion. Although it is obscured by trees, this photo gives a glimpse of the home.
The Birkey Mansion was the home of James L. Birkey and family. It was built on a large tract of land on the corner of East Main Street and Buena Vista Street in the 1850s. [1] The home was built of red brick and stood three stories high with a ballroom on the third floor, rumored to be haunted by a ghost. The grounds were decorated with rose gardens and shade trees, creating a park-like setting. [2]

James Birkey was a local businessman who located to Newark and quickly immersed himself in the local economy. In addition to operating a dry goods store, he was instrumental in bringing the Mansfield and Sandusky Railroad to Newark, later operated as the Lake Erie division of the B&O. Additionally, he helped to pioneer the distillation of petroleum from coal. [3] Eventually, Birkey’s business ventures fell on hard times and he and his family fled westward. [4] Convinced that a successful railroad venture in Kansas that he was involved with was failing, Birkey died by suicide in a St. Louis hotel.[5]

After the Birkey family left the residence, it was difficult to find someone capable of maintaining the property. The W.N. Fulton family and the Blood family both occupied the home for a period of time, as well as tenants. [6] Eventually, the former Birkey property was purchased by real estate developers. After a few years of determination as to whether the title was clear for sale, it was found to be free and clear and the property was sold off in lots and developed in 1891. [7] The house was demolished, the landscaping removed, and the Birkey Mansion became yet another memory of a bygone era.