There have been a number of reported airplane crashes recorded in Licking County.

In 1907, the Coshocton Aerial Navigation Co. built a small dirigible captained by Captain Frank Fuhr, which was used for joyrides at local county fairs in the area. Fuhr was contracted to do four flights during the Licking County Fair in Newark and experienced difficulties with all attempts. The first attempt failed when the ship got caught in a tree. On the second attempt, the plane was over taken by by a strong wind an carried over Newark at about 1,800 feet. As the wind began growing stronger Fuhr lost control of the plane and was forced to slash the nylon blimp and crash into a tree. Fuhr was able to climb out of the tree safely. Fuhr's flight caught the attention of The New York Times which wrote about the incident on October 4th, 1907. [1] 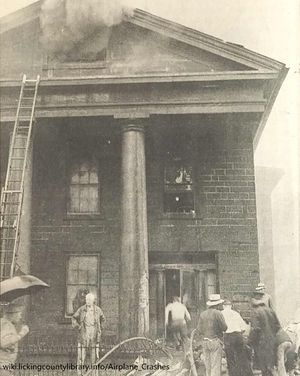 Perhaps the most well known plane crash occurred on September 8th, 1942 when a B-25 bomber carrying passengers from Wright Field in Dayton to Mitchell field in New York, [2] crashed into the corner of Hudson and Wyoming Streets in downtown Newark. All six men on the bomber were killed in the tragedy, including five soldiers and one civilian, as well as two Newark women caught in the debris. Mrs. Jane Irwin, 62, was killed when the plane hit the apartment house she owned on Hudson Street, and Mrs. Dollie Campbell, 73, died as she walked along the street near the crash after leaving Carroll's Department Store. There were a number of other injured as well.

The pilot, Colonel Douglass Kilpatrick, was killed when he attempted to bail out of the plane, but due to the wet weather, his parachute failed to open and he fell through the roof of an office building at the corner of Clinton and Locust Streets. The co-pilot Second Lieutenant A.C. Lauver was also killed when he tried to bail out and he landed on the concrete loading platform of the fright office at the B&O Railroad Depot. The other men, Corporal Charles Watson, Private Russell Arens, Second Lieutenant Russell Mewlin and Ovido Picon were found amongst the wreckage. [3]

The explosion scattered wreckage for more than half a block and the gasoline spilled quickly ignited to cause a large fire. It took more than 100 firemen and volunteers to put out the blaze. The incident is known as Ohio's worst military aviation accident. [4] The cause of the crash has since been attributed to severe weather encountered en route. The crash time was 12:03 p.m.. [5]

On Thursday April 4th, 1946 two Thunderbolt fighter planes collided over Flint Ridge State Park, causing one to explode on Stacy Conrad farm. Lt. William Green bailed out of his crippled plane, with his parachute carrying him five miles from the scene of the crash. The pilot of the other plane, Lt. Weldon Groves was able to make an emergency landing at Lockbourne Air Base. [6]

Lt. Homer G. Smitha of Indianapolis, Indiana crash-landed a Corsair fighter plane near the south shore of Buckeye Lake on Saturday, August 13, 1949.[7] Smitha was met by approximately 100 pleasure boats after impact, but reports are mixed as to whether he was pulled from the water or swam to shore. Smitha had been engaged in a training exercise with the Naval Air Reserve at Port Columbus when the crash occurred.[8]

Two men from the Buckeye Lake area were killed when an airplane they rented from the Newark Airport crashed in a field owned by Robert Wolfe along Township Road 305 northeast of Hebron, Ohio, on March 11, 1954. Charles Alpha Oatney and William C. Brown were the only passengers aboard the plane and were both killed in the crash. Oatney, who was piloting the plane, had been practicing stunt maneuvers when the accident occurred. A few witnesses saw the crash, as they had been watching the aircraft perform several spins and tricks for nearly a half hour before nosediving into the field.[9]

Another plane crash occurred in November of 1955 when the plane of Lt. J.J. Malanaphy crashed in a field off Rt. 79 near Wilkins Corners.[10] Lt. Malanaphy of Houston, TX was one for four in a formation traveling from Lowry Air Force Base in Colorado to Lockbourne that crashed around 10:20 p.m. on a Friday evening. Malanaphy was missing for about 12 hours before his body was found buried in a muddy corn field. The plane of Lt. Russell Thoburn also crashed, but Lt. Thoburn was able to eject himself and float safely to a nearby tree. He was treated at the local hospital for abrasions and shock. Inclement weather was said to be the cause of the double crash. [11]

A twin-engine cargo plane was forced to make a crash landing in Buckeye Lake after running out of gas in the early morning hours of Wednesday, August 17, 1977. The aircraft was piloted by James Burdick of Conshohochen, Pennsylvania, with Larry Guilfoyle also riding onboard. The plane landed in the lake near the home of Tom Clark, who lived on Zanesville Avenue in Buckeye Lake. Clark was awoken by the noise of the impact and quickly went out to assist the men, who both suffered head and face injuries. Clark and his wife brought the men to their home and performed first aid until responders arrived and transported the injured men to Licking Memorial Hospital in Newark. The plane was en route to Columbus from Philadelphia when the crash occurred.[12]

On Friday, February 14th, 1992 a fiery crash involving a single-engine Piper Saratoga airplane killed all three passengers aboard. [13] The coroner reported that the bodies were burned beyond recognition, and all the victims died on impact. [14] The plane was found in a cornfield off Lake Drive in Heath, near the Newark-Heath Airport. There were four scheduled passengers, but one was called away at the last minute for a court subpoena and never boarded the plane. The three passengers were identified as pilot Dr. James McCaulley, 43, Robert Rice, and Teresa Wagner, 26. The plane was flying from Mansfield to Newark to attend a meeting. The cause of the crash has been attributed to ice, which had been formed over a portion of the craft, making it too heavy to fly.

Blowing snow caused a small airplane to crash at the Newark/Heath airport on Monday, January 11th, 1999. The weather and reduced visibility caused a Piper Navajo airplane, flown by Justus Denhardt to roll off the runway and veer into a snow bank on the left side of the runway at 4:25 p.m. There were no injuries. [15]