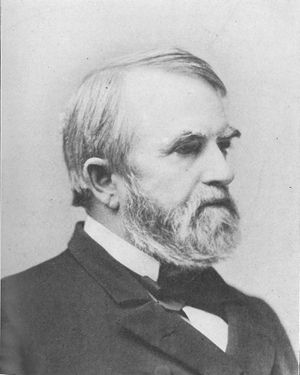 William Burnham Woods lived an accomplished life in the service of the United States. He held the rank of brevetted major general in the Union army during the Civil War and pursued a distinguished career in law, eventually serving as a United States Supreme Court Justice.

Woods was born in Newark, Ohio on August 3, 1824. Woods' father moved from Kentucky to Newark in 1818 and his mother was a native of Zanesville. One of four children, including his brother Charles R. Woods who also became a general in the Civil War, William Woods began his education at Western Reserve University and then finished at Yale university in 1844. He joined the Ohio bar association in 1847 and practiced law in Newark at the firm of King and Woods. Woods entered politics in 1856 when he became mayor of Newark as a Democrat and joined the Ohio House of representatives in 1857. He would eventually become Speaker in 1858. He served in the Civil War from 1861 to 1866, attaining the rank of Major General. He fought in several major battles and marched with General Sherman. [1]

After the War, Woods would undergo two major changes in his life: moving to the South and becoming a Republican. In 1869, President Grant appointed him as a Federal Judge in Georgia. [2] President Hayes appointed him to the U.S. Supreme Court in 1880, and he took the oath of office on January 5, 1881. Woods served on the Supreme Court until his death on May 14, 1887. He lies buried at Cedar Hill Cemetery in Newark. [3]

The most important court cases that Woods ruled on were the Slaughterhouse Cases and Presser Vs. State of Illinois. As a circuit court judge, Woods ruled with the majority opinion in support of Slaughterhouse to bolster federal authority from the 14th Amendment in regards to citizenship rights, but the case was later overturned by the Supreme Court. In Presser, Woods, now on the Supreme Court, rejected the premise that the 2nd Amendment guaranteed the right to bear arms in a militia not sanctioned by the state and in defiance of state law.

Judge Woods was a close friend of Joseph C. Wehrle, founder of the Wehrle Stove Company in Newark. Judge Woods' portrait hangs in the Licking County Courthouse, and the Woodside School was named after him.